Putin habla de que estén implicadas todas las partes "Putin and Rutte “stressed that it should be an international investigation which should be conducted by the International Civil Aviation Organisation (ICAO) with the participation of all interested parties”.

"'I told him "time is running out for you to show the world that you have good intentions, that you will take responsibility",' Rutte said. Putin now 'has to show that he will do what is expected of him and will exert his influence,' ..." 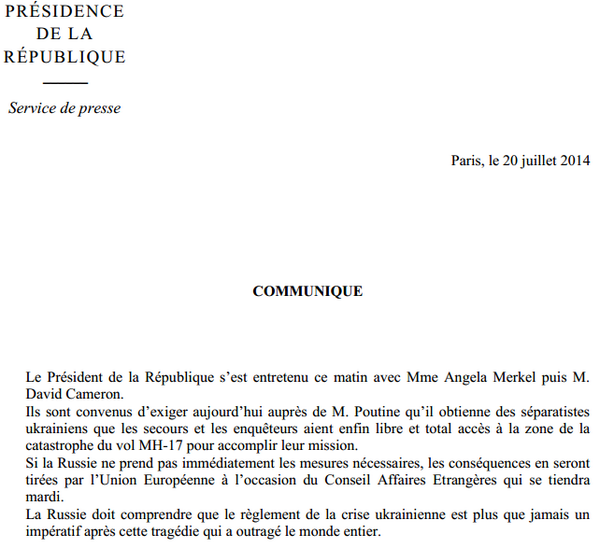 "Audio data provided to the press by the Ukrainian security service was evaluated by Intelligence Community analysts who confirmed these were authentic conversations between known separatist leaders, based on comparing the Ukraine-released internet audio to recordings of known separatists."
http://ukraine.usembassy.gov/statements ... 92014.html

Last weekend, Russia sent a convoy of military equipment with up to 150 vehicles including tanks, armored personnel carriers, artillery, and multiple rocket launchers to the separatist. We also have information indicating that Russia is providing training to separatist fighters at a facility in southwest Russia, and this effort included training on air defense systems.

Pro-Russian separatist fighters have demonstrated proficiency with surface-to-air missile systems and have downed more than a dozen aircraft over the past few months, including two large transport aircraft.

At the time that flight MH17 dropped out of contact, we detected a surface-to-air missile (SAM) launch from a separatist-controlled area in southeastern Ukraine. We believe this missile was an SA-11.

Intercepts of separatist communications posted on YouTube by the Ukrainian government indicate the separatists were in possession of a SA-11 system as early as Monday July 14th. In the intercepts, the separatists made repeated references to having and repositioning Buk (SA-11) systems.

Social media postings on Thursday show an SA-11 system traveling through the separatist-controlled towns of Torez and Snizhne, near the crash site and assessed location of the SAM launch. From this location, the SA-11 has the range and altitude capability to have shot down flight MH17.

Ukraine also operates SA-11 systems, but we are confident no Ukrainian air defense systems were within range of the crash. Ukrainian forces have also not fired a single surface-to-air missile during the conflict, despite often complaining about violations of their airspace by Russian military aircraft.

Shortly after the crash, separatists – including the self-proclaimed “Defense Minister” of the Donetsk People’s Republic Igor Strelkov – claimed responsibility for shooting down a military transport plane on social media.

In an intercepted conversation that has been widely posted on the internet, a known-separatist leader tells another person that a separatist faction downed the aircraft. After it became evident that the plane was a civilian airliner, separatists deleted social media posts boasting about shooting down a plane and possessing a Buk (SA-11) SAM system.

Audio data provided to the press by the Ukrainian security service was evaluated by Intelligence Community analysts who confirmed these were authentic conversations between known separatist leaders, based on comparing the Ukraine-released internet audio to recordings of known separatists.

Video posted on social media yesterday show an SA-11 on a transporter traveling through the Krasnodon are back to Russia. The video indicated the system was missing at least one missile, suggesting it had conducted a launch.

Events on the ground at the crash site clearly demonstrate that separatists are in full control of the area.
http://ukraine.usembassy.gov/statements ... 92014.html