A large bang heard by hundreds across the country last night was a sonic boom caused by two Typhoon aircraft responding to an emergency, the Ministry of Defence said.
The RAF jets were despatched to a small civilian helicopter that had emitted an emergency signal on a frequency it should not have been using, but the error was realised too late.
An MoD spokesman said the fighter planes, scrambled from RAF Conningsby, in Lincolnshire, had been authorised to go supersonic and were already on their way to the helicopter.

Authorities said the first aircraft was intercepted at about 7 p.m. over Long Island when it entered a flight area that was temporarily restricted near Air Force One, which was stationed at Kennedy Airport at the time.

The F-15 fighter jets escorted the Kitfox -- a small experimental aircraft -- to MacArthur Airport on Long Island, where it was met by local police. 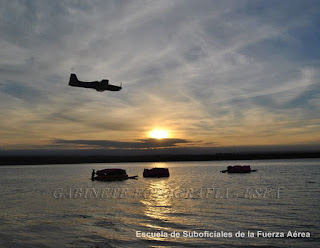 It matters not how strait the gate. How charged with punishments the scroll.
I am the master of my fate: I am the captain of my soul. - From "Invictus", poem by William Ernest Henley
Arriba
11500 mensajes