The U.S. Navy's new Irregular Warfare office has been looking at an agile Brazilian observation and ground-attack turboprop to provide an "organic" close air support aircraft for special operations forces.

Under the classified "Imminent Fury" program, the Navy has already leased, tested and armed at least one Embraer EMB-314 Super Tucano, according to Capt. Mark Mullins, a naval special warfare officer serving as the deputy director of the Navy Irregular Warfare Office at the Pentagon.

"This is a close air support, manned aircraft with a pilot and sensor operator. The idea here is that SOF needs an organic capability that can stick with them while they're doing their mission," Mullins said. "We're not buying them; we're leasing them right now. That's an important point."

Speaking March 12 at an exposition on expeditionary warfare in Virginia Beach, Va., Mullins said the intent is to put four of the single-engine aircraft into the fight as quickly as possible.

"Now we're in an operational pause, trying to figure out how to get to Phase II. We need about $44 million," he said. "Back to the method of venture capitalism, we're working with the Air Force and Marine Corps, socializing it with those guys to see if we can get money invested and get to Phase II, where we're taking four aircraft into theater."

The EMB-314 is flown by the military forces of Brazil and Colombia, according to Christine Manna, communications director at Embraer's office for North America in Fort Lauderdale, Fla.

As well, Manna said, Chile bought 12 planes and the Dominican Republic bought eight, but the planes have not been delivered yet.

The Super Tucano has a flight endurance of more than six hours, carries several sensors, can be armed with a heavy machine gun in each wing and has mounts for bombs, cannon and rocket pods, according to Jane's All the World's Aircraft 2008-9.

Calling it a "fascinating piece of kit," Mullins said "the proof of concept" is complete after a year of testing. But he described Imminent Fury as his new office's "most contentious project," mostly due to wariness from naval aviation.

"You can imagine the SOF guys and Marines really love this," he said. "The challenge here, and why it's so contentious, is it falls into the seam where it's really not clear whose bailiwick it is. It's not a marinized aircraft. It doesn't fly off the carrier."

Mullins said the Super Tucano can be landed on an unimproved airstrip such as a road, refueled in minutes and sent right back into the fray.

The project began following a visit by Navy Secretary Donald Winter with naval special warfare task forces in the Central Command area in October 2007, according to a similar brief.

"It's not about flying in from 1,000 miles away, dropping some thousand-pound bombs and leaving," Mullins said. "It's about working with [the ground force], doing the intelligence preparation of the battlespace, doing a [communication] relay, close air support, eyes on target and if there's squirters leaving the target, keeping up with them and tracking them down and doing [bomb damage assessment] at the end."

Although Mullins said the project is awaiting funding to move forward, a slide in Mullins' presentation indicated it's sponsored by the Office of the Secretary of Defense, Naval Air Systems Command and the Navy.

"Imminent Fury is a classified Navy initiative to address urgent warfighter needs," said Lt. Sean Robertson, a Navy spokesman at the Pentagon. "Initial developmental testing has been promising, and the Navy is currently conducting discussions with our Joint partners on various courses of action as this initiative moves forward."

The Irregular Warfare office, part of the Navy staff at the Pentagon, was established in July under the direction of Adm. Gary Roughead, the chief of naval operations. It's headed by Rear Adm. Mark Kenny, a submariner.

"Our goal is to rapidly deliver capabilities and effects," Mullins said. "And we are the CNO's lead for irregular warfare." 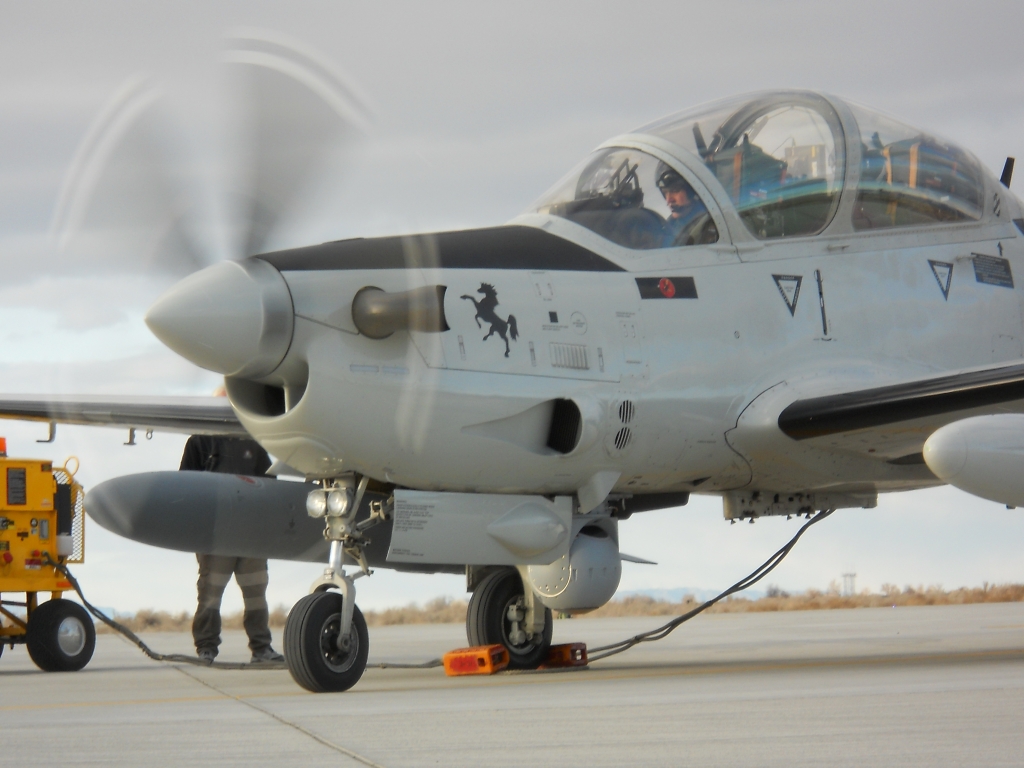 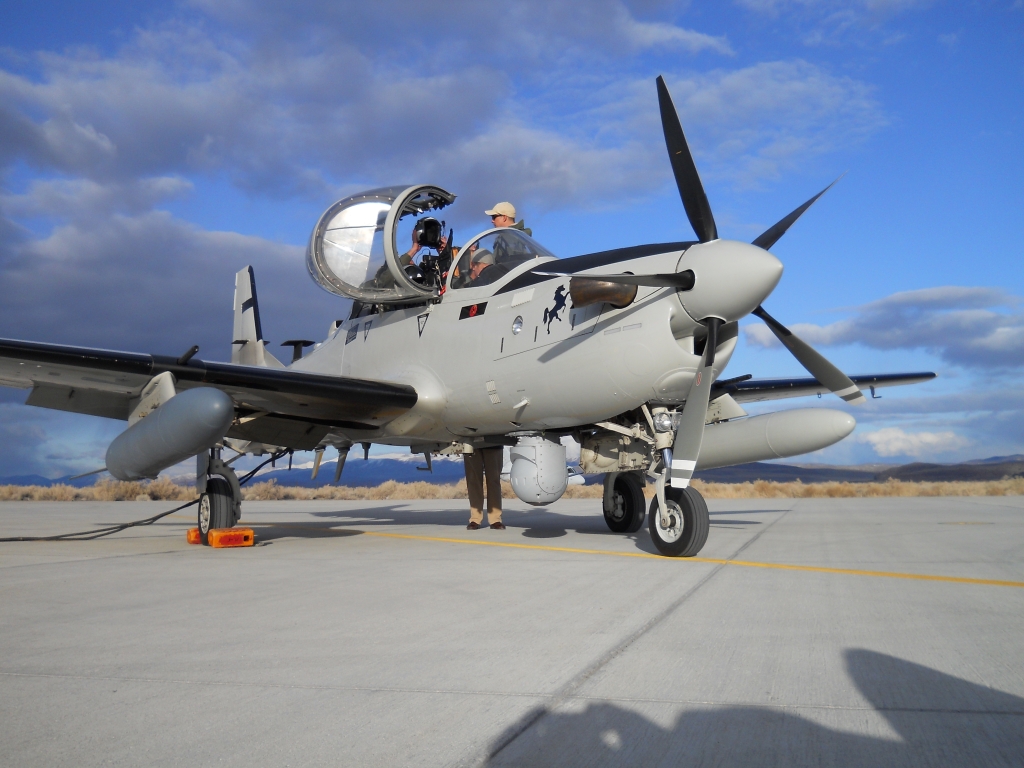 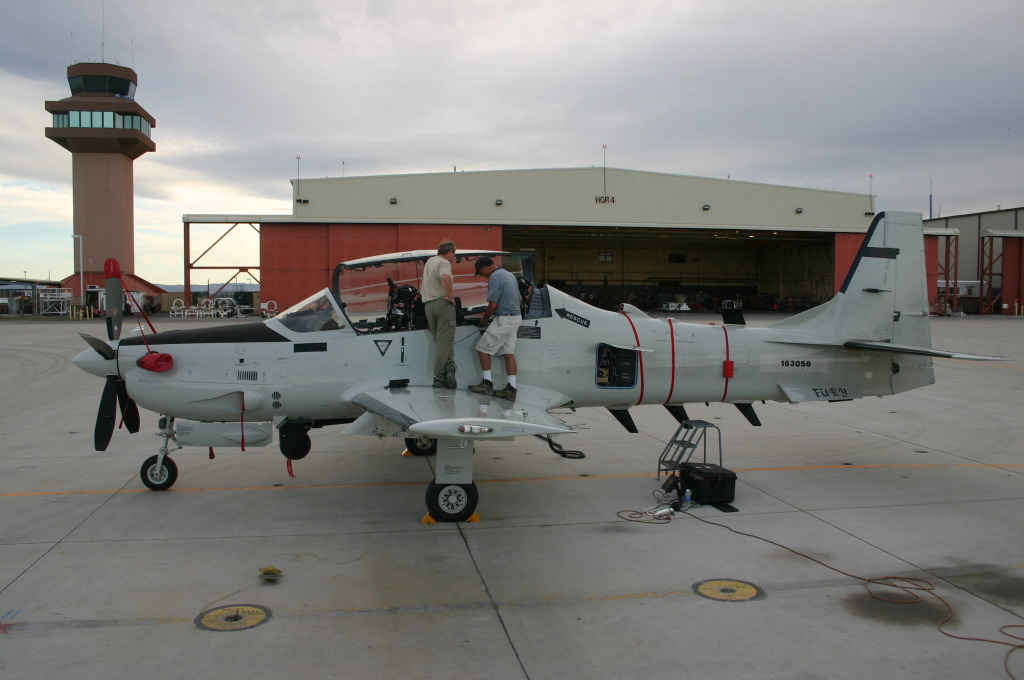 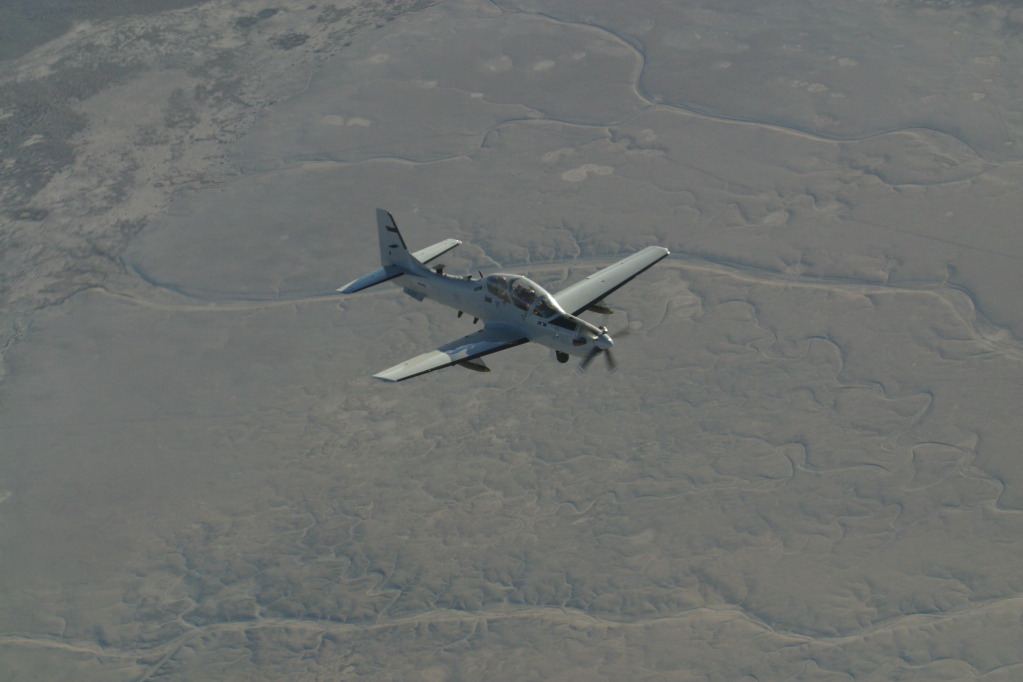 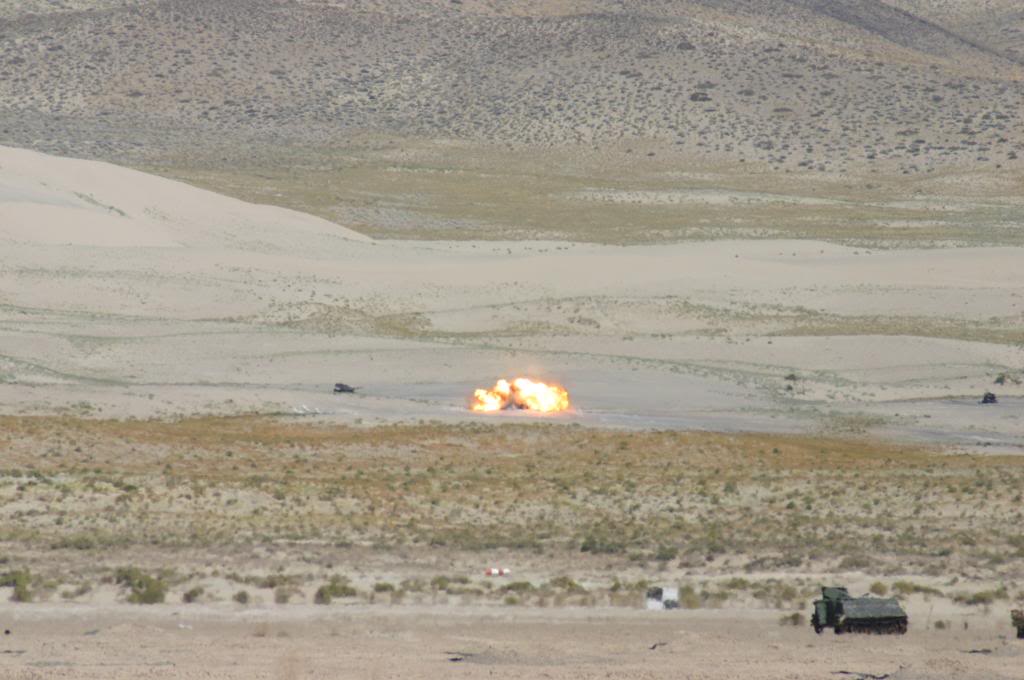 Guatemala will purchase six Brazilian military aircraft Super Tucano, radars and other equipment to combat the narcotics trade traffic of which the Central American country is considered a crucial link between South America and the United States.

A-29 Super T: Built For The Mission
http://www.youtube.com/watch?v=4pEq1GldklA

The A-29 Super Tucano stands alone as the only combat-proven, mission ready and operational contender in the U.S. Air Force Light Air Support (LAS) competition.

CDR James H. Flatley, IV USN, (Ret) discusses his experience with the A-29 Super Tucano and details how the aircraft is the only combat-proven, mission ready and operational contender in the U.S. Air Force Light Air Support competition.

CDR James H. Flatley, IV USN, (Ret) discusses his experience with the A-29 Super Tucano and how the internally wing-mounted .50 cal machine guns make the plane superior to the prototype AT-6.

The State of Florida is working to stimulate its economy and develop public-private partnerships that result in investment and job creation. One such example would be the assembly of the A-29 Super Tucano for the U.S. Air Force's light air support (LAS) mission in Afghanistan.

"Take Embraer, the jet manufacturer and one of Brazil's biggest exporters. The United States accounts for about 65 percent of its sales. But about 70 percent of the parts that it puts into its planes are made in the United States."

"Now, these economic relations, therefore, are not zero sum. Ultimately, they do benefit the people of every country involved."

Lt. Gen. Fred McCorkle, USMC Ret. discusses the role Lord Corporation plays as a supplier to the A-29 Super Tucano. The selection of the EMB 314 (A-29 Super Tucano) will mean the creation of new high paying jobs American jobs.

Lt. Gen. Fred McCorkle, USMC Ret. discusses the LAS Mission and the urgent need to provide a proven aircraft to the forces in Afghanistan.


The world leader in forward looking infrared, FLIR Systems is one of 60+ American suppliers on the A-29 Super Tucano. The Super T stands alone as the only combat-proven, mission ready and operational contender in the U.S. Air Force Light Air Support competition.


A-29 Super Tucano: Takeoff and Landing on rugged terrain

To see the A-29 Super Tucano take off and land on an austere airstrip is to know the rugged power and extreme performance of this combat proven light attack aircraft. This is but one of more than 170 Super Tucanos in service today. The A-29 has logged more than 16,000 combat hours with no combat losses. It has more than 130 certified weapons load configurations. The competition? They have only two prototype, experimental planes that have no internal guns and have not been certified to drop any ordinance.

Elbit Systems of America President and CEO, Raanan Horowitz, talks about the 100+ high paying jobs that will be created at his company when the USAF selects the A-29 Super Tucano for the LAS mission.

Test Pilot Cris Brayman describes the exceptional persistence of the A-29 Super Tucano (EMB 314). Time on station translates to critical impact on the fight and support of troops the ground.

Test Pilot Cris Brayman shares a detailed breakdown of the component parts of the A-29 Super Tucano (EMB 314) that make it uniquely qualified for the Light Air Support mission. 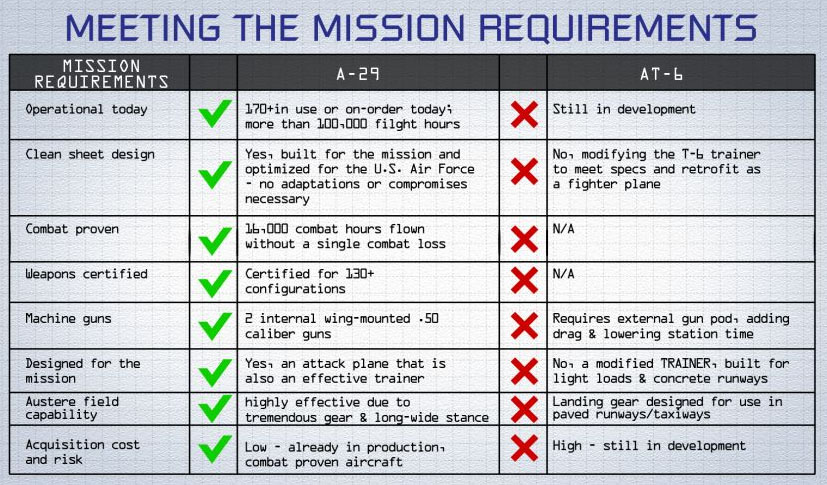 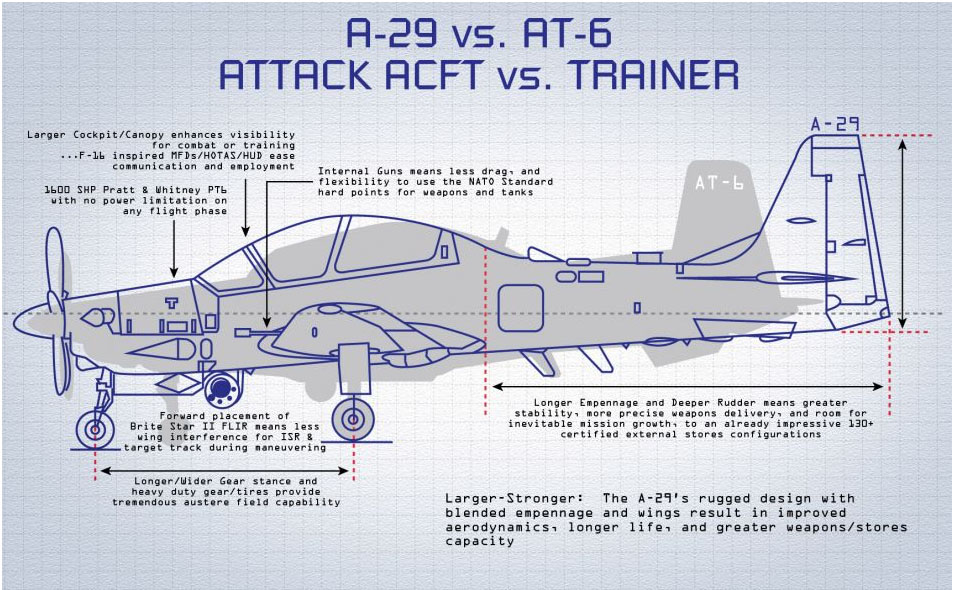